What is bail?
Bail is the process of releasing suspects from custody before their hearing, on payment of money or pledge of property to the court which may be refunded if suspects return to court for their trial. Bail practices in the United States are regulated and vary from state to state.

In the United States there are several forms of bail used, which vary from jurisdiction. "The dominant forms of release are by surety bond, i.e. release on bail that is lent to the accused by a bond dealer, and non-financial release."  Our company, as most other Bail Bonding companies offer Surety Bonds.
Surety Bond: By a surety bond, a third party agrees to be responsible for the debt or obligation of the defendant. In many jurisdictions this service is provided commercially by a bail bondsman, where the agent will receive 10% of the bail amount up front and will keep that amount regardless of whether the defendant appears in court. Type your paragraph here.

Click the below link to read the State of Florida Bail Bond Statutes on line. All you need to know about the legal stuff in Bail Bonds.

Surety Company available 24/7 serving all of Florida.  We can conduct an inmate search Nationwide and provide assistance in getting your love ones released. 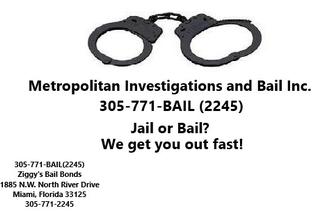 At 305-771-BAIL (2245) we are a professional Bail Bond service.  We have many years of experience and treat our customers with respect and dignity. We know that the bail bond process can be stressful and make it our mission to help you every step of the way.  We have offices in south Miami-Dade, Central Miami-Dade and will come to you anywhere in Miami-Dade, Broward, Palm Beach, Collier and Monroe counties.

​Call, email or text us and we will begin to work on your request immediately. We start the bail bonds process before you hang up the phone!